The Whale Shark is an aquatic creature in Stranded Deep. It falls into the shark category and it can only be found in the open sea.

Whale sharks can be identified by their blueish body coloration along with the white dots scattered on them. It is also noticeably bigger than all other sharks except The Meg. Whale sharks are passive - they will never attack the player, although they can still flip their raft if the player isn't careful. They can only be found swimming in the open sea. If damaged enough, it has a chance of running away to avoid death.

Whale sharks can be killed and skinned using a refined knife. Its large meat does not spoil if not skinned, making it one of the only infinitely lasting food sources along with smoked food.

If killed, it will slowly sink.

Almost no strategy is required due to them being harmless. Crude spears are highly recommended due to them being cheap and most of the time doing a great job at killing them. Refined spears get the job done as well, although they demand more resources and can be easily lost if the shark decides to flee. Melee weapons and tools can be used, but consuming a shark repellent beforehand is recommended to avoid other sharks.

The main problem the player can have while fighting is the whale shark fleeing, fortunately, it is often seen eventually returning to the player.

Another risk is a second shark encounter that is aggressive. While it is rare to see 2 sharks in one spot, it can be easily countered by using a shark repellent or simply killing the other shark. 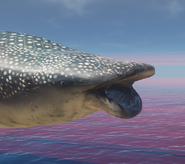 Whale shark pogging
Add a photo to this gallery

Retrieved from "https://stranded-deep.fandom.com/wiki/Whale_Shark?oldid=23987"
Community content is available under CC-BY-SA unless otherwise noted.