Jumping out of water

The Meg is one of the three bosses in Stranded Deep. It can only be found in a special boss area.

The Meg is the biggest shark in the game, which represents a giant prehistoric shark - Megalodon - but smaller. It has a lot of bruises on its front body, suggesting that it is not an ordinary shark and has been through quite some stuff. It also has an unidentified device on it's dorsal fin, which can be speculated to be a tracking device (check gallery for more information)

During a fight, it can:

If the player successfully kills it, they will unlock 2 recipes that do not need any crafting materials to craft, but can only be made once: Meg trophy and aircraft rudder part (The player can craft these a second or more times if the boss is re-beat).

It is found randomly in the world and there is only one.

Its special boss area is a dead whale that is being eaten by The Meg itself. While the player cannot know its exact location, it can be found in one of the ??? areas that are shown in the cartographer (example on the left side of the screen).

To have maximum chances of surviving and emerging victorious, the player MUST have:

- Crude spears are a cheaper and a bit weaker alternative;

- DO NOT use fishing spears - they have a much lower throwing range and inflict the least damage.

The player's damage will depend on their hunting skill, which will make easy work of The Meg if it is at max level.

The key to winning is ALWAYS MOVING, meaning you will need as much space as you can get. The Meg will sometimes jump out of the water and try to grab the player, often inflicting bleeding (use bandages or gauze if this happens). 3x3 - 5x4 rafts are highly recommended. This can be partly prevented by constantly attacking the shark.

Every time the Meg gets attacked, it will receive a speed boost for a short time, which can mean very unpredictable movements and attacks incoming.

Fighting underwater will put the player in a huge disadvantage which will increase the chance of dying by a lot - not recommended. Its movement pattern is similar to a great white's, meaning it can charge at the player from below and also drag the player, usually inflicting bleeding (use bandages or gauze to stop it);

It is highly recommended to bring shelves with containers on your raft for backup spears, bandages, food and arrows (+fuel if the player uses boat motor on their raft). 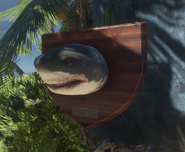 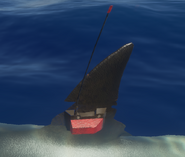 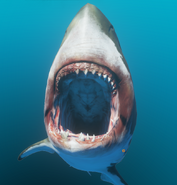 The Meg's open mouth
Add a photo to this gallery
Retrieved from "https://stranded-deep.fandom.com/wiki/The_Meg?oldid=23934"
Community content is available under CC-BY-SA unless otherwise noted.