During the course of Stranded Deep, one may find the occasional wreck lying somewhere in the environment. Shipwrecks are large underwater structures introduced in v0.01 of Stranded Deep. They are the dilapidated remains of boats that seem to have been abandoned for several years. They can be found near or on islands or at the bottom of the ocean.

Each wreck type contains several compartments where different kinds of loot can be salvaged.Many tools and other loot items can be found here.Large components can be uncovered from console cabinets in the main compartments.

One must take care when exploring wrecks, especially those found either directly on land or in the deeper parts of the ocean. Reaching and salvaging loot from deeper wrecks often requires the use of an air tank to avoid drowning. Sharks can also be found patrolling the waters next to the wrecks, so one must be wary of them before diving in. Bubbles will rise to the surface if the wreck is completely submerged, this can help you locate wrecks.

Both ship and plane wrecks are usually filled with containers such as Lockers, Cabinets, and Container Crates. These containers often contain valuable supplies that could be used to the player's advantage. 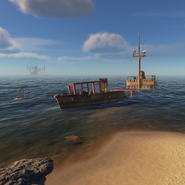 Add a photo to this gallery

Retrieved from "https://stranded-deep.fandom.com/wiki/Shipwreck?oldid=24018"
Community content is available under CC-BY-SA unless otherwise noted.