Any ranged weapon
The Hog is a land animal in Stranded Deep. It can be found on any big island.

The hog is a stronger and aggressive alternative of the boar. It will charge into the player whenever it sees them. It is the strongest non-aquatic animal in the game, dealing up to 2 health bars of damage (depending on your vitality level) per hit. The hog runs a little bit slower than the player, meaning it is possible to outrun it. The player can kill and skin the hog using a refined knife.

Hogs respawn 7 days after getting killed.

As long as the player keeps distance, they will kill the hog rather easily. It is highly recommended for one to use ranged weapons like crude spears, refined spears, crude bow, and the speargun to avoid receiving damage. Hogs will not go into the water or on the raft (but can still reach you if you're close enough), so an efficient strategy would be taking advantage of either and attacking the hog from distance.

If one wants to use melee, there isn't any efficient strategy. The hog can attack from all sides, including their behind, meaning you cannot sneak up on them and attack their back, even if it is running away from you.

A hog that is stuck in shallow waters 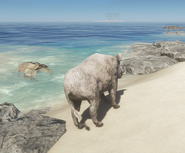 Sneaking up on a hog
Add a photo to this gallery

Retrieved from "https://stranded-deep.fandom.com/wiki/Hog?oldid=24062"
Community content is available under CC-BY-SA unless otherwise noted.