Downgrades to a Crude Hammer

Building
The Hammer is an item found in Stranded Deep. They can be found stored inside shipwrecks. The hammer acts as the stronger variant of the crude hammer.The hammer is used to build structures such as foundations and walls. The player must be holding the hammer in order to build anything, as long as all the appropriate building materials are present. 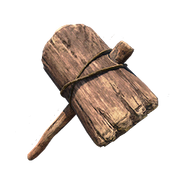 Retrieved from "https://stranded-deep.fandom.com/wiki/Hammer?oldid=24051"
Community content is available under CC-BY-SA unless otherwise noted.